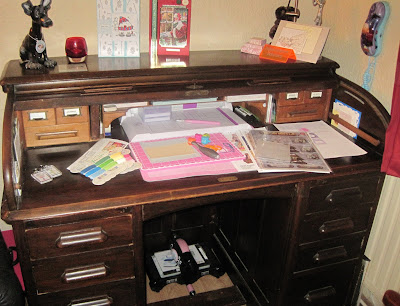 Thought I would be one of the last this week!
Had a busy day at work but when I came home I had two parcels waiting for me
So had to have my tea first then sort out boring washing then finally I got to open them :) 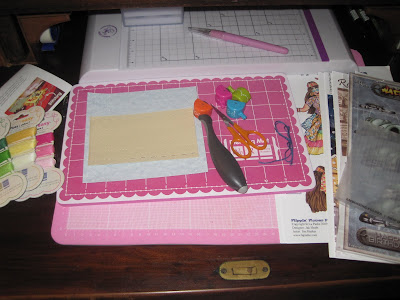 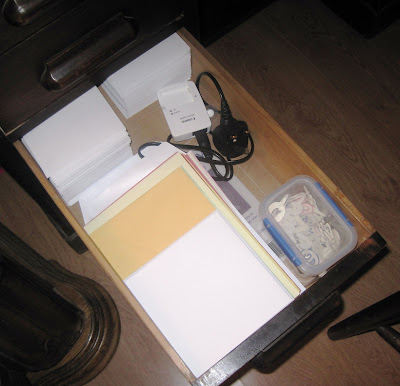 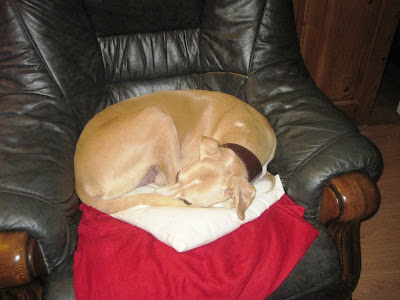 at 11/24/2010 08:38:00 pm
Email ThisBlogThis!Share to TwitterShare to FacebookShare to Pinterest
Labels: WOYWW

Lovely things to play with in a very organised space. Thanks for the snoop!
Chrissie #5

Oh I enjoyed that snoop. I am amazed by the number of pets that like their owners chairs. My Toby used to sit on my knee and stop me from crafting!! Actually (says this in private) he used to follow me to the bathroom and sit on my knee there too!!!!!!!!!!!!!!! (13)

ooh Nicky , you are a tidy worker huh - all that excitement of new stuff and no parcel or packaging even in the shot - and you contained yourself and did chores first. How admirable! Enjoy the sew easy - show us some results won't you?!

You desk looks fab and new goodies too.SEW Easy heard this on few blogs what exactly is this ?i know soew easy...lol im intrigued.Enjoy your goodies
hugs jude#3

I like your new stuff. Have fun with them!#30

great desk! i'm usually too excited to wait to open packages. and you did some chores first! wow!

Your dog is gorgeous, cannot understand some people - fancy dumping a dog! And how on earth do you wait to open parcels, I'm ripping mine open before I've even closed the door to the postman! I've seen that new stitching tool in action and it is fab - enjoy! :-)

Oh Stiggy is so sweet, so glad you rescued him. Lovely new stash you have there did you order off QVC, as I saw something like that on Craft day. Just love your desk, obviously it keeps you very tidy. thanks for the snoop. Big Hugs JO.xx*25*

Lovely new crafty candy! Now your camera charger?? Hmm, that sounds so much better than MY camera, which has batteries, that keep going flat. and my cat has now taken to sleeping on my printer, and not my chair (luckily...she'll wait out side the loo but doesn't come in!) Very tidy crafty space, thanks for popping over, I'm nowhere near half way round yet. Have A Happy WOYWW ((Lyn))

Hi there, oh isn't it lovely when the postman brings a parcel for you. Looks like you've got a new toy, great !
What a beautiful desk all that lovely warm wood and crafting stuff on it. Stiggy's gorgeous, thank you for visiting me and your lovely comments:0) xx

Hi Nicky, Your desk is lovely, all that polished wood. Hope you enjoy playing with your new goodies. Thanks for your comment on my blog and the idea of sellling the little machine for more stash is tempting however I don't think DH would be best pleased :) Elizabeth #44

What a lovely organised desk.

Talk about a clean work space! Lucky you. I would love to know what you think of the Sew Easy once you put it to use. I hate poking those holes. Thanks for visiting.
#89

Don't know how you could make tea and sort washing out before opening parcels. I would have had to put everything on hold.
Love the picture of Stig - what a beautiful dog - amazes me how people can abandon (or worse, be cruel) to animals. Glad he has a loving home

Stiggy is so cute! I am glad he found a nice home with you and your family!
Your desk is gorgeous! It looks old and well-made, beautiful!
Have fun with your new stash!!
xoxo karen

Love the desk you work on, and especially like your faux stitching tool...may have to acquire one for myself!
Your dog looks very cosy there btw! Maz (65) x

What a neat nice space you have. thanks for the comment on my blog.

I'm afraid everything would have had to wait, the papers would of been ripped off as soon as I got in the door. Love your desk and it's so tidy. Thanks for the snoop and for visiting me! Carolxx....79

What a fun peek at your work space - so neat and clean! Even your drawers are perfectly organized. How I need to learn to do that. lol. oooh Stiggy is such a sweety, I would love to give him a pat or two. Best to you and the family.

You are scarily well organised, lady! Thanks for your visit and I hope you stuck to the close up shots and didn't look too closely at my desk - it would probably give a tidy girl like you heart failure!!

Nice Desk! Love it! I love my big old desk I work on, it can take much more of a pummeling then anything ikea could supply me with!I saw the pricking tool kit myself & wonder'd if its as good as it looks? Hope we get too see something you make with it???? Thanks for showing off your drawers :))
Lavinia
x

Oh I just love your desk! So pretty! I would have been like you, getting everything done and then rewarding myself with opening my packages. I've seen quite a bit about this sew easy, might have to check in to this... #104

What a lovely smart crafting desk you have and it does look very tidy and organised. I saw the sew easy thingy on QVC but decided against it - so will be interested to hear how you find it.

Thanks for stopping by my desk already.

Fabulous desk and such a cute stiggy.

I like the cards that are on top of your desk, they look beautiful. And little Stiggy is adorable!

Such a beautiful crafting space; that desk is truly gorgeous. I am blown away by your self discipline in doing the chores before you opened your parcels. Glad to see Stiggy looking so snug on the chair.

Hello fellow Nicky, great name lol
Loving your traditional desk, all those ickle draws to hide stash in!
I too have the sew easy but i'm not quite sold on the effects yet, maybe i need more practice lol

I love your desk. It's fabulous. Absolutely gorgeous. All those drawers and cubbys... Yum! Not to mention the ability to close the lid when it all gets too much!

What a neat and tidy desk. The sew easy sounds interesting.

I enjoyed the snoop

What a beautiful desk!
Sue xx 77

Thats the exact position my dogs have adopted - scrunched up into a tight ball. Mine look like smaller versions of yours, a Jack Russell and a Jack Russell/whippet cross :P Aint no budging them.

thanks for the peek, that gadget for doing faux stitching sounds usefull, and as for the dog curled up.....cute
hugs

be blessed
from Angela #69