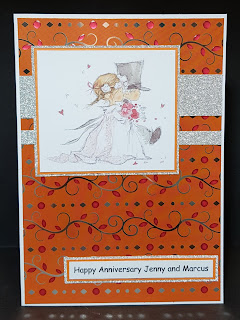 I cannot believe that its a year already since my daughter married
Her and Marcus are now happily settled in their own home
and shoving it with that cat and three lizards
for their anniversary card I have used a pre- coloured
Lili off the valley image
I matted it onto a piece of orange card
and then again onto some silver card
I did the same with the sentiment
The base cardstock is some metallic embossed card
with the red is like gems, I brought it ages ago
but could not bring myself to useit as it's so nice!
But I decide my daughter and son- in-law
were a worthy reason to use it

This card is for the following challenges:

A really pretty card for your daughter, many thanks for joining in with our 'Autumn Glory' theme at Allsorts challenge.

A lovely image and super papers. Thank you for joining our 'Autumn Glory' challenge at Allsorts.

A super cute autumn wedding card, the image is adorable!
Thanks so much for joining in at Allsorts challenge this week!
xEllie