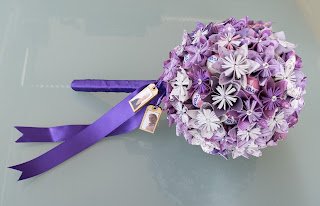 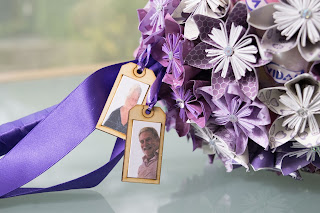 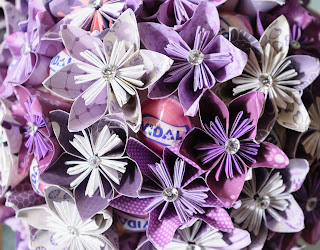 Thought I would share the bouquet I made for my daughters wedding.
This was made using squares of paper that you fold into each petal, then I stuck 5 or 6 petal around a cocktail stick to form each flower and finished with a gem in the centre.
It was a real labour of love.
She wanted lollies in her bouquet so I used a round polystyrene ball to stick the lollies and the flowers in, with some pencils taped together to form the handles. These were then hidden by the purple ribbon that matched the colour theme.
It was a bouquet that could not be thrown as it would have caused damage but she was really pleased with it as she did not want real flowers.
As a surprise for Jen and Marcus I added the tags with the some pictures of some grandparents that watched from heaven, so she felt they were part of the day.
I made a smaller one for her bridesmaid to carry as well.

I am entering this into the following challenges

Wow Nicky - what a fabulous bouquet! Clever you and the added touch of the photos is so sweet.

Stunning make a labour of love, love the colour and your finishing touches, thank you for joining in at MMM

Love this project!! It is wonderful!

Thank you for playing along with Simon Says Stamp Monday Challenge! We all hope to see you again soon xx Zoey

This is totally stunning, most certainly a labour of love. Thanks for sharing with us at Make My Monday. Caz DT.