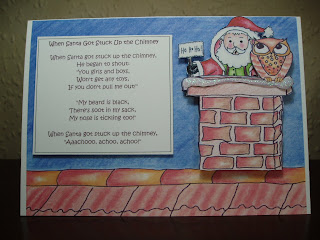 These weeks Dotties challenge was to design something using a Dottie image and a song. I struggled a bit because all I could think off was Rocking around the Christmas tree which I had used for the 115 days until Christmas challenge. But after alot of use of the old grey matter I decided to go with 'When Santa got stuck up the Chimney' I used George as Santa and cut him out so the he fitted in the Chimney, the image of the roof also came from the Christmas Collection. I enlarge this image and printed it twice, on the second image I just cut out the chimney and owl. I then Stuck it together using silicon glue. Finishing it with the words slightly raised of the card and little glitter glue. All images were the pre-coloured ones I thought as I was playing catch up I would save time. Thanks to Lousie for the Challenge
at 9/28/2008 01:13:00 pm
Email ThisBlogThis!Share to TwitterShare to FacebookShare to Pinterest
Labels: Dotties World

Love this one, I came so close to using this song too, but love how you have got George up the chimney. x

Oh, great choice you have me singing again! I love this Nicky, well done.

Nicky that's brilliant! I love how you've got Santa stuck up the chimney! Perfect!

I love how you have incorporated two images there, very clever :)